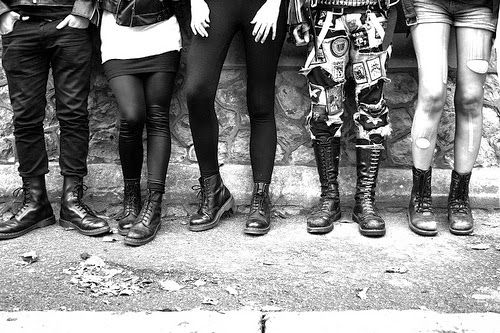 Do you remember when you got your first pair of Doc Martens?

For me, it was 1984, just in time for The Clash at the SFX. With The Clash you knew who was going to turn up but to spice it up, London’s finest were supported by an anarchic Belfast skinhead outfit, The Outcasts, who brought their own crew.

Every skinhead in Dublin was up the front, gobbing, sweating, moshing, scrapping and generally causing mayhem. Dublin’s legendary scum-punks left their squat and were out in force, all mohawks and snarls. The place was about to kick off.

Yet for this swotty Blackrock College boy, who was in truth more Rock the Casbah than Sandinista!, new Doc Martens offered protection. In my Docs, a skinhead riot at the SFX felt as natural as a chemistry grind.

Docs made kids part of something else, a bigger tribe. They were an outward sign of inner rebellion. Originally devised by a demobbed Wehrmacht soldier with bad heels, by the 1970s Doc Martens had become an essential part of youth culture. They stood for anarchy, anti-establishment anger and were an indispensable part of the unofficial uniform of subversion.

The work boots were adopted by 1970s punks and skins while the loafer version was de rigueur for Mods, Nutty Boys and various other 1980s offshoots. The oxblood 12-hole Doc Martens, worn with jeans rolled up, became the quintessential attire of the working-class, or not-so-working-class, radical.

This week the Doc Marten, footwear of the nihilist, anarchist, anti-capitalist punk movement, will be floated on the London Stock Exchange by uber capitalist private equity buccaneers.

The flotation of Doc Martens is the story of our age, an unprecedentedly unequal era, where everything can be commodified, repackaged and resold. The process of flipping and leveraging assets generates enormous returns for the ultimate owners who are usually far removed from the original creators.

The story of Doc Martens is the story of the financialisation of the global economy. It is a tale of credit cycles, access to capital and a winner-takes-all form of capitalism that undermines our social fabric. The story is a microcosm of much that is problematic with late-stage, 21st-century financial engineering.

Docs, which were central to anti-profit, non-conformist protest movements, will now be benchmarked by earnings before interest, taxes, depreciation and amortisation, owned by profit-maximising shareholders.

Counterculture has been co-opted by bean counting. The bohemian becomes the bourgeois. It is also the story of how the very wealthy have become much wealthier and how this wealth inequality is shaking the foundations of democracy all over the West.

By the late 1960s, Dr Klaus Maertens, the German soldier-innovator and his investor partner Herbert Funck had enjoyed modest success with his unusual boot, with its air-sealed technology.

These producers were part of the extraordinarily entrepreneurial German post-war generation, who innovated relentlessly, creating all sorts of manufacturing products for the European post-war boom. These were working bosses, who stayed close to their workers, understanding that social bonds are important.

His major market for the laced-up, Doctor Maertens boots were middle-aged female factory workers who needed both protection and comfort. In the pre-website world, products were sold via trade catalogues. A British shoe manufacturer, R Griggs, bought the patent for the UK in 1959, but it was when Pete Townsend of The Who started wearing Doc Martens that the ugly, clunky work boot with the bouncy airtight soles took off.

When interest rates were close to zero in 2012, the Griggs family sold the company to a private equity outfit for $300 million. This is where the story gets interesting from a financial and globalisation perspective.

The company had already moved production from the UK to China and Thailand, dramatically lowering costs. Today, Dr Martens sell more than 11 million pairs of shoes and boots every year in more than 60 countries.

The private equity company plans to float Doc Martens at a valuation of $4 billion. This means that a finance company, which was able to avail of cheap money in 2012 when the central banks were printing money to save the post-crash economy, will, in the space of a decade, make more than 12 times its original investment.

Furthermore, while private equity deals are structured opaquely, they normally involve a small amount of equity, carrying a significant amount of debt. This means that if the debt-to-equity ratio of the original deal was 90/10, the return on committed equity could be more than 100 times the original cash investment.

It is not difficult to see why, at times of very low interest rates, the return to the already wealthy and financially literate goes through the roof. Financial engineering that benefits the extremely rich, converts an everyday shoe company into a gold mine. (We are talking Doc Martens here, not a life-saving Covid vaccine.)

In the America that Joe Biden will lead from Wednesday, wealth inequality is one of the issues he must ameliorate. The top 10 per cent of wealthiest families in the US (some 13 million families hold over $1.22 million in wealth) hold 76 per cent of total household wealth.

In 1941, US supreme court justice Louis Brandeis noted: “We can have democracy in this country, or we can have great wealth concentrated in the hands of a few, but we can’t have both.”

After what America has just come through, Joe Biden would be wise to take that observation on board, and block the Wall Street-Washington corridor by which former Wall Streeters graduate to big jobs in government, fuelled by a messianic belief in financial globalisation.

He might do well to remember what happened to the original SFX, where the Clash played that night. St Francis Xavier, a priest, met his death in China in 1552, bringing to an end the first era of financial globalisation, which he and Jesuits had sponsored, encouraged and blessed.