The road from Beirut to the Roman ruins at Baalbek takes you on the main highway to Damascus, the same route the occupying Syrian army rumbled along, east to west, throughout their 20-year occupation during Lebanon’s civil war.

With a certain cruel symmetry, it is the same road trodden west to east by the desperate refugees escaping the horror of Syria’s own civil war. Lebanon, a country of around 6.8 million, has absorbed about 1.8 million Syrian refugees.

Passing over the Green Line that separated Beirut’s Christians from its Muslims, passing by the brutalist “egg-cinema”, testimony to a time when this city of the early 1970s played host to all sorts of confident experimental architecture, you can travel down to the port, where the world’s largest non-nuclear explosion ever detonated in August 2020, destroying huge swathes of an already pock-marked city.

Black market traders exchange dollars at the crossroads. A little over a year ago, the Lebanese pound traded at 1,500 to the dollar. Last night it was 21,000. People’s salaries have fallen in real terms by over 90 per cent. Most places would throw in the towel. Not here. Not yet anyway.

The road that leads up and over Mount Lebanon travels through a patchwork of different ethnic regions. Christian areas, populated by Greeks and Maronites, are followed by a Druze area towards the top of the mountain, before sweeping down to the Sunni of the Bekaa Valley, the Roman Catholics at Zahle (with more shrines to the Virgin Mary than Knock), and on to Shia territory, past the Palestinians, back to the Sunnis and on again to the Shia, Hezbollah-supporting town of Baalbek and its glorious Roman ruins.

Like Belfast, each area, each sectarian zone is distinctly marked by its own flags and posters just in case you need reminding. In Shia areas, Hezbollah’s stronghold, giant posters of Iranian military commander Qasem Soleimani, assassinated by the US last year, beam down at you. Yasser Arafat still adorns Palestinian streets, while the head of the Lebanese army, Joseph Aoun, watches over Maronite villages and Sunni regions boast images of MBS of Saudi Arabia. With friends like that, who needs enemies?

Criss-crossing this tiny country involves a crash-course in national, regional and international politics, interests and alliances.

For the past 50 years, Lebanon has been the fulcrum for proxy wars as the main players cynically move their chess pieces about the assorted ethnic board that is this state.

Against this background, the intermittent cedar-adorned flags of the Republic of Lebanon appear more of a vague aspiration than representing any reality. However, the one place where all the Lebanese converge is in the economy, where the plunging currency tells its own story. They share a currency, an inflation rate and economic fate.

The question is, what happens to a country when money dies? 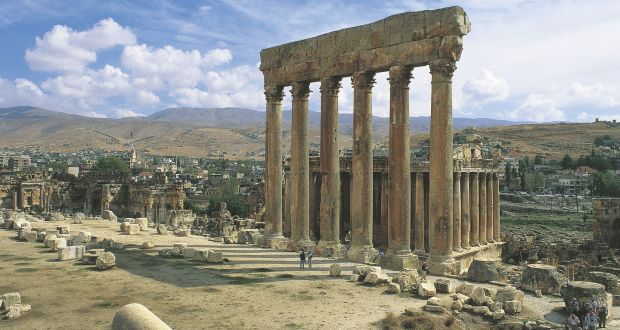