When the yin meets the yang

My dad used to tell me about the numerous pawnbrokers in Dun Laoghaire, and how it was common for people to use them at the end of a week, or coming up to some big event, to get cash for clothes, jewellery or anything that could be used as collateral. If the person didn’t pay back the loan, the pawnshop sold the collateral.

It is thought that the three balls which symbolise a pawnshop are the coat of arms for the Medici family from Lombardy in Italy, because in medieval days banking in Europe was dominated by these northern Italians. Indeed, in many European countries a pawnshop is called a Lombard. There is still a bank in Ireland called Lombard & Ulster, indicating the endurance of the word in the world of lending.

Up until 40-odd years ago, small-time lending lubricated commercial life all over the world. Irish commercial life before 1950 was a massive system of low-level lending and borrowing. Typically, shopkeepers, publicans and undertakers provided credit to the town or village. In such a system, severe punishment for the defaulter was an essential part of the financial architecture, which ensured that the system worked. If the defaulter wasn’t punished, credit would dry up very quickly in the event that a payment or payments were missed.

As it was a profitable business, many entered the game in the hope of making good money.

My dad told me that in the 1940s when a new pawnbroker arrived on the scene, there would be a brief period when there would be lots of cash doing the rounds because the new pawnshop offered loans at lower interest rates to gain a bit of market share. In time, the market equalled itself out, but in the beginning, a new pawnshop meant a mini cash bonanza.

In modern financial markets, the central bank is nothing more than a large pawnbroker, giving banks money in return for collateral. The more money it gives out, the more the banks have the ability to make more new loans to the economy and the more likely it is that the economy will grow.

However, when the central banks lend out lots and lots of money, a portion of this new money finds its way into other asset prices and drives them up.

The opposite occurs too. One interesting difference between the old pawnbroker and the new omnipotent Central Bank is, because the central bank prints money, the sanction against the defaulter is less exacting than in the old days.

In the past few weeks, the power of central bank lending on financial markets has been evident, and so too is the evidence that defaulters get second chances.

Defaulting is nothing more than an acknowledgement that the loans are not worth as much as they were when they were first given out. Debt restructuring is an entirely natural part of the economic landscape.

Do you remember when experts in Ireland argued that if a country defaulted it would never able to borrow again?

Greece, not two years ago, presided over the biggest default in financial history. It refused to pay over €100 billion of its national debt. And what happened? Nothing much actually. 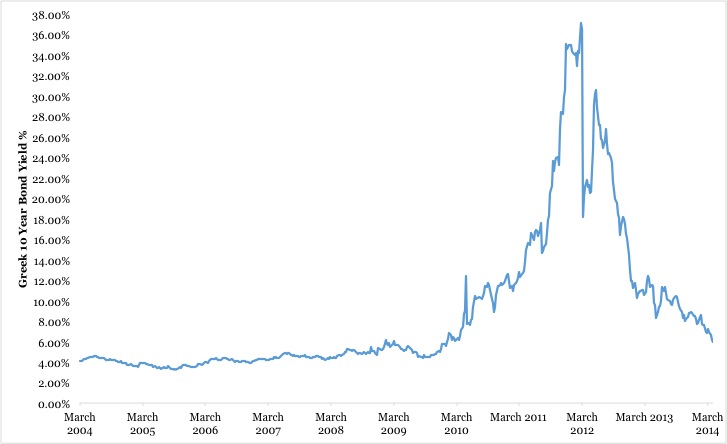 Look at the first graph, which measures Greek ten-year interest rates. You can see clearly that, despite refusing to pay its debts, Greece has been forgiven. Greek interest rates are back down to pre-crisis levels. What does this tell us?

It tells us that the story we were – and are – being told by the Irish financial establishment is not true.

Last week, a Greek bond sale which aimed to raise €3 billion at 4.95 per cent, attracted around €20 billion of bids. The very people who Greece defaulted on are back falling all over themselves to lend to the Greeks again. That’s just the way it goes. Financial markets have no memory. Mature adults do deals. In the eurozone, these deals are brokered by the ECB.

It is quite simple really. The two-year rally in peripheral bond markets (Ireland included) has been rented, not earned. It is rented because the rally is based on the ECB’s implied promise to buy all dodgy debts in the eurozone if it has to. These low yields on massive debts will only be earned when the growth rates increase, and this means that the ECB will have to adopt an aggressive form of QE soon to try to overcome Europe’s liquidity trap. This all implies that the pawnbroker will be working overtime in the years ahead, keeping interest rates low.

This means that assets in Europe, stocks, bond and property, will continue to rise for some time. This includes Dublin property prices.

But now look what happens when a central bank switches off the taps.

In the US, the Fed is gradually taking money out of the system – the pawnbroker is running a tighter shop. This means that the assets that were most dependent on cheap money are getting hammered. Interestingly, the assets that were actually most based on the traditional pawnbroker approach to finance were the very assets which promised a brave new future – the tech stocks

The Nasdaq has fallen much more aggressively than the Dow which is dominated by old companies. So the markets have gone from being tech evangelists to tech sceptics in the past few weeks. All the big tech names, from Facebook to Twitter, LinkedIn and Netflix have seen their share prices hammered.

Now look at graph number two, the S&P 500 versus the Nasdaq. 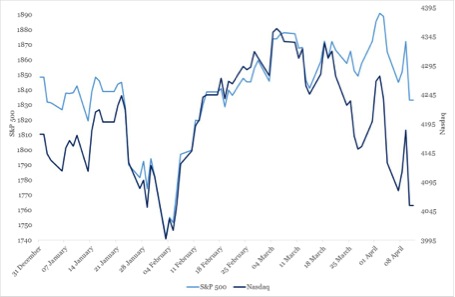 Once the Central Bank begins to reduce the amount of money in the system, lots of basic things, like profits, that were assumed away in the tech boom, come back into focus.

People are now asking: do these tech companies actually have any chance of making money? Can Twitter translate users into cash? Can Netflix do the same? Maybe the peak in the Nasdaq coincided with the IPO of King Digital (the maker of Candy Crush), which wobbled and flopped three weeks ago.

Could this be the 2014 version of the Pets.com flotation in the last dotcom boom?

Like all bubbles, mini or not, when people start trying to get out they find the exit door is very small. That is why the tech crunch has plenty more potential to continue.

Like Irish housing at the top of the market between 2006 and 2007, when things start to wobble, and sellers run for cover, it’s very difficult to stop.

It’s impossible to see the Fed changing course to bailout the billionaires of Silicon Valley, so this tech price carnage could go on for a while. Across the pond, here in Europe, with ECB Central Bank president Mario Draghi promising more and more cheap funds, it is equally hard to see asset prices doing anything but rising – and that means three-bedroom semis in Dublin too!

David, In the US QE benefited the already wealthy. The boom in property was in high-end property in places like Manhattan. QE did not flow into main-st lending, so your assertion that Dublin Property prices will rise on the back of QE may be true if some of the direct beneficiaries of QE in the IFSC decide they want to compete for trophy homes in Dalkey again. For ordinary families scrambling over the restricted supply of semi-ds in the suburbs your assertion may not ring through. Frankly, I think you need to be clearer about this. Your presentation on Prime… Read more »

So, Nobody but the Real Estate Shylocks wants to see a runaway House Price Bluff all over again – that’s for sure. However, many like myself will be praying that Variable rates stay low a little longer – especially if you’re struggling to just about meet your interest repayments and a little more each month. Higher rates for over 20 % of mortgage holders (those in long term arrears) could prove to be the tipping point and just the incentive those in the bank’s Arrears “Support” Units with Tea Party vigour for repossession, need to increase the carnage of family… Read more »

I am fairly unconvinced that there is a credit boom in Dublin, in fact I think we are in the dying stages of a Dead Cat Bounce. My theory is 1) In early 2013 the government brought in the ban the bedsits law. 2) This took a few months to work through the system but rents increased fairly substantially from late 2012 to 2013. That wasn’t, as David points out, demographics. Nor was it economic growth although that did pick up. 3) Because rents increased cash moved in, and because cash moved in a floor was set in the market,… Read more »

“Financial markets have no memory” is,however unintentional, somewhat misleading i feel,to the uninitiated in stocks/bonds etc ,like myself. We are all agreed ,i hope,that the financial markets are certainly not suffering from amnesia and senile dementia hasn’t set in either ;) The ‘success’ of these new Greek bonds has feic all to do with the memory of markets and/or lack thereof, or of mature adults doing deals either.The markets know all too well and are motivated by the Fact, that all things being equal, Mario D will be,is, “the buyer of last resort”, for the sake of the ‘Euro family’s’… Read more »

David – if you know anybody thinking of putting their name forward on the EP ticket before the deadline kicks in this week, please give them your encouragement. The line up on some of the constituencies is abysmal. Serial non-performers and “business as usual” types prevail. Some of them are even confident that all they have to do is stick up posters and they will get elected on the back of large party votes, and party money. Diarmuid Flynn and Nessa Childers are the only ones that inspire any solid confidence of greater transparency from EU institutions, with no agenda,… Read more »

Let’s see if there is a housing bubble on the other side of a decline in the amount of cash flowing into social media companies….. Many of these companies are investing money on the basis that they are getting it, and they are chasing market share – they are not investing money on the basis that is is realised revenue. It is unsustainable. What is it about the east of Ireland in general, and DART line Dublin in particular, that loves a housing price boom ? Many participants do really think that Dublin is the centre of the universe. I… Read more »

Goes some way to explain all the nonsense in German media about Ireland as ‘Musterschuler’.

Right. On the 7 am to Frankfurt. Each week. Why were the Irish politicians so subservient during the so-called recession? We fit out ca. 12 x 7k sqm / p / annum in DE. I don’t understand why ie inc did not use its leverage? The German Banks are exposed to ie, not the other way around.
David, why do you write for Capital? Diametrically opp to what you stand for. Puzzled