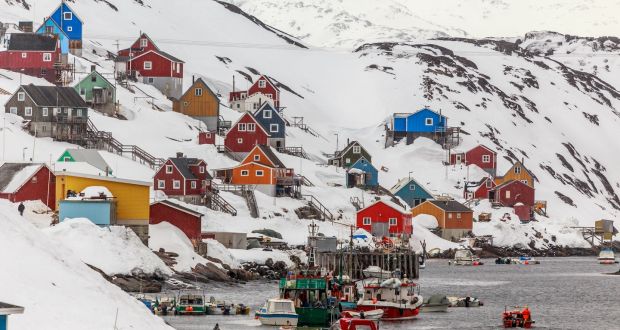 Further down the coast, in what they called the eastern settlement, more evidence points to a civilisation that became extinct. Archaeologists found a huge amount of wooden objects, nails, cups, hinges, axes and other valuable materials that would usually be taken by survivors when a village is abandoned, as you would expect people to take their possessions to the next place. These Vikings left their possessions because they did not go anywhere else; they all died.

Animal bone evidence tells a grim story. Foot bones of wild birds and rabbits, normally too small for anyone to be bothered with eating, are everywhere – last-ditch famine food. Toe bones of cattle eaten down to the hooves, bones of new-born calves and lambs, even the skeletons of large hunting dogs with knife marks in their bones. They killed and ate their hunting dogs, for they had given up. Lambs and calves were slaughtered in that spring, as they knew they wouldn’t survive to see their animals grow.

Jared Diamond clearly sets all this out in his book Collapse: Why societies choose to fail or succeed. These people starved and froze to death in a viciously cold spring some hundred years or so after the young man in the more remote village succumbed to a similar fate. They were the last of the Vikings, desperate starving people who gathered in the last remaining settlement in search of fuel, food, and warmth. They all perished, the last of their kind, 400 years of Viking history and culture, comprising villages of thousands of people – who left books, churches, sagas behind them – all snuffed out.

What happened and why is it relevant to today’s climate crisis?

The Norsemen arrived in Greenland as part of the great Viking push westwards, largely out of Norway in about 800/850 AD. Having set up their trading colonies in Ireland, they moved further northwest to Iceland, Greenland and ultimately to Vinland or Canada. The Viking world was split into Ostmen (themselves from the east) and Westmen (the colonised peoples of – mainly – Ireland). Oxmanstown in Dublin, close to Stoneybatter, derives its name from the place the original Ostmen lived within the settlement around the year 900. The Irish, the Westmen, lived elsewhere.

Taking slaves from Ireland to populate their new colonies, the Vikings recreated Norse society in the far northwest Atlantic. As migrants always do, they brought their culture, customs, and food from the old country. Settling in southern Greenland, the Norsemen began to farm much as they’d done in Norway and Ireland, eating cattle, pigs, goats, and sheep. They cut turf, built stone homes and churches, fashioned furniture from the plentiful supply of wood. For those familiar with the ice, snow and tundra scrub of modern Greenland, naming the place as some sort of emerald paradise sounds like a joke; but it wasn’t. When the Vikings arrived, the place was teeming with lush green, virgin pasture, woodland, a plentiful sea and the climate, although hardly tropical, was bearable.

The colony’s population of about 5,000 lived on about 250 farms, with an average of 20 people per farm. Although initially tolerable, it wasn’t warm enough for pastoral farming and cows were kept in shelters for up to nine months of the year. The pigs, prized by Vikings, uprooted the fragile vegetation, over time destroying topsoil protection. Sheep and goat became staples. Fishing appears to have been uncommon, perhaps because the Vikings looked down their colonial noses at what the Inuit locals of Greenland were eating.

To keep themselves and their animals warm, they cut down trees and burned wood for fuel. Being wedded to iron tools, they smelted local low-grade ore. Unfortunately, wood, when burned, doesn’t get hot enough to smelt so they used charcoal. It takes four times the wood to generate one unit of charcoal, and thus the deforestation continued wholesale. They cleared huge amounts of forest to create grazing pastures for their livestock, which caused soil erosion. Cutting or burning the forests and shrubs, which are highly effective at holding soil, starts the depletion.

With the vegetation gone, the grazing livestock needs more grass, which regenerates very slowly in the harsh climate. With the grass depleted, strong winds and biting Arctic rains blow off the topsoil, exposing a layer of sand beneath. In time, the ecological effect of overcultivation is less and less arable land. The colony’s productive footprint began to shrink. The less arable land you have, the smaller the herd of cattle.

Just as things were getting tricky in Greenland, the stranded Vikings were then slammed by a pandemic. The Black Death decimated the population of Norway, reducing the manpower to sail to Greenland. Less sailing meant they were starved of imported wood, decent iron and tar for insulation. The colony was becoming isolated, forced to survive on its own dwindling resources. And then they were hit by climate change. Between the years 800-1300 AD, Greenland enjoyed a relatively mild climate; North Atlantic ice had melted, making sailing safer, and the longer summers meant livestock could graze longer in meadows while European crops – oats and barley – could be cultivated even this far north. This came to an end around the year 1300, in the Little Ice Age. While their Viking descendants in Dublin skated on the Liffey, their long-lost Viking cousins in Greenland froze to death.

As we consider the impact of ecological degradation, climate change and over consumption of the world’s finite resources, spare a thought for the last of the Greenland Norse. Unlike their Inuit neighbours, who worked with nature, adapting to Mother Earth’s dictum, the Norse thought they could bend the earth to their will. They failed. They depleted their own resources and continued to farm pastorally, assuming their better technology would save them. Continuing to live as if they were in plentiful Ireland, they destroyed their own environment through overcultivation. Ecologically snookered, in the end they sat starving in their European-style houses, hoping something or someone would turn up. Neither did and their civilization disappeared.