Why young Irish are still leaving for London in their droves 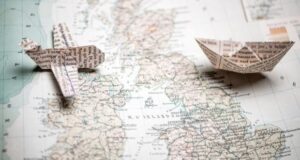 In my parents’ day it was Kilburn, in mine it was Clapham and for my children it’s Hackney. Whether its north, south or east, the move is the same. Despite a booming local economy, record low levels of unemployment, higher wages and career opportunities that were not afforded to previous generations, young Irish people are still choosing London. In 2021, at the height of Covid, 54,000 young Irish people emigrated. These figures are likely to be much higher for 2022.

Kojaque, the Dublin rapper, recently played a set in London Fields which was rammed with twentysomething Irish graduates, many of whom have just arrived. For my generation, migration is entirely normal. In fact, leaving your home is a transformative act, signalling a reluctance to be hemmed in. Many of us thought that once Ireland’s economy caught up, emigration would taper off. That didn’t happen. How do we reconcile a flowering national economy with significant emigration? When the Irish economy was broken, we were poor and had no opportunities, leaving was a way out. Today, it’s different. What’s happening?

When it comes to the jobs market, we must look at it against the background of an economy emerging from a two-year lockdown. Pent-up demand is cascading down on an economy that is experiencing severe shortages, as the entire machine – our complex interrelated economy – tries to adjust after the pandemic.

What better place to start than in Dublin Airport? The airport is a microcosm. Everyone wants to travel and there aren’t enough security staff. Queues lengthen when too much demand slams into lack of supply. According to the DAA, when hundreds of planes were sitting on the tarmac during Covid, about a thousand workers left as part of a voluntary redundancy package. They have not returned and until there are enough workers at the airport, there will be delays.

Similar stories appear throughout the domestic economy. A recent survey conducted by Solas in October indicates that almost half of IT and engineering firms are having difficulty recruiting, despite the country producing all-time high numbers of graduates. Similar difficulties were reported by more than a quarter of respondents in the construction sector. Ireland is still producing too few apprentices in key trades, with the 8,607 new registrations last year still below the 10,000 per annum that the Government is targeting. These skilled workers are of critical importance to the construction sector and planned retrofitting projects.

In hospitality and tourism, about 80 per cent of respondents are finding staffing shortages, which have led to reductions in trading hours. It’s estimated that the sector is facing some 40,000 vacancies. A large hospitality employer told me that people are coming back to the sector, particularly waiters and bar staff, but at a very slow rate. Nationally, hiring chefs and other kitchen staff is proving difficult (according to 88 per cent of respondents). As we head into summer, it’s proving equally difficult to retain existing staff as opportunities abound within the sector. On the ground, everyone has their own story. Wages are skyrocketing as a result.

For example, the going rate for bouncers in Kilkenny has risen hugely, apparently from about €13 to €20 an hour. The taxi driver who collected me last night on High Street said he used to be a bouncer and might go back on the door due to the rising fees. This is how a booming economy works – things are related and sectors bleed into each other, as everyone bids for staff. Lots of the shortages can be put down to the fact that net inward migration was down 86 per cent during the first year of the pandemic and it has not recovered. The notion that immigrants are “taking our jobs” is a nonsense. The truth is that no one is taking the jobs, particularly the young Irish who are leaving. If they’re not leaving because of unemployment, then what is the push or pull?

Housing is the main factor. The London Irish twentysomethings I know all identify housing as the major issue. While international comparisons are tricky, a report from late last year categorised Dublin as the sixth most expensive capital city in the world (third in Europe) for renting a one-bed apartment – ahead of vibrant European cities like Amsterdam, Stockholm and Copenhagen. While the report ranks Ireland below London, it’s worth noting anecdotally that the same money you might spend in Dublin would get you a significantly higher quality place in London. The supply in London is far superior, so euro-for-euro, the type of place you end up with there, for your money, is far better. This is a fact worth considering when you hear arguments – raging in housing debates in Ireland – that one-bedroom rental flats are in some way not proper homes. Of course, they are, particularly for young single people.

Another factor that annoys youngsters is our dreadful nightlife. The list of nightclubs and music venues around Ireland that have closed since the onset of the pandemic is long. While most were in Dublin, it’s baffling that Galway (a university town and one of the country’s bigger cities) doesn’t have a nightclub since the closure of Electric/Halo last year. Without nightlife, cities and towns die. Going back to ancient Athens, nightlife is an essential element of a city’s offering. Even Aristotle wrote about heading down to check out the nightlife in the bars of Piraeus.

As well as late-night music venues, clubs and bars, other underappreciated factors include more traditional amenities and infrastructure such as decent public transport, green spaces, country-wide cycle lanes, urban lidos, the sort of things that are taken for granted in other developed countries. Why should Irish twentysomethings not have the same stuff their European peers enjoy?

In addition to the broadening of one’s horizons, spending time and experiencing life in a large city has a profoundly positive impact on a person’s future earnings. In an excellent paper, two urban economists (Puga and De La Roca) have illustrated the wage premiums associated with gaining experience in bigger cities and how, remarkably, these premiums are retained even when workers move back to smaller towns/cities or countries. People who work in bigger cities, expect – and get – higher wages, even when they come home.

Going from Ireland to London in your 20s will probably benefit you for the rest of your working life. That said, while Ireland has done the hard part and unemployment is no longer an issue, the challenge for this generation is to fix housing. Then and only then, will young Irish people truly emigrate willingly. Until that day, emigration is a vote on Irish society. Today, far too many are giving it the thumbs down.