Will big data and economics destory the beautiful game?

If you are a Liverpool fan, don’t read this! When I was young and playing football, I remember the routine at the kick-off from under-eights upwards. If it was our kick-off, the two wingers (usually small lads) tapped the ball to each other and rolled it back to the centre-half, usually the biggest lad on the field, who then hoofed it up as far as possible towards the opponent’s penalty box.

This we did every game without fail. We got possession and promptly gave it away – ceding possession but gaining momentarily territory. Football back then was a game of territory and was meant to be played, as much as possible, in the opponent’s half. This was a rudimentary example of the “put ’em under pressure” style of football and, as far as we were concerned, it made lots of sense.

The other three most common expressions to be heard in the playing cauldron that was Hyde Road, Dalkey, was “get rid of it”, “when in doubt kick it out” and “up the line”. “Get rid of it” was the mantra for every manager to every footballer. The game of football, which should be a game of possession where being on the ball is rewarded, was replaced by a game of rejection where being without the football was rewarded.

The other great expression was “up the line”. This meant if there was a throw-in, the only thing that a kid could do was fling the ball up the line in the hope that a team-mate would put it back into touch and, therefore, your team would gain territory.

We thought this was how football was played. Everyone in the South Dublin Schoolboys’ League played this way so we thought it was normal, until we went on an under-14s trip to Germany. They didn’t hoof the ball; they passed. They didn’t thump the ball into touch, they kept it in play and rarely flung the ball down the line from throws.

This was all new to us. But more interestingly, their manager was counting the passes, taking notes, telling them to be patient. We got hammered four times in a week. The difference between us and those German under-14s was they measured things and we hoped for the best. Fast-forward to today and we see that, with the arrival of big data and computer advances, measurement is now central to football teams as it is in baseball, basketball and rugby.

In fact, one of the biggest differences between football and other sports is the fact that even though so much money is at stake, data analytics still doesn’t play a huge part in the set-up of teams.

This is likely to change. Welcome to the economisation of football. We are about to enter a new world where all big clubs will measure everything. It is being done at the moment by some of the Premiership outfits. In time, big data will collide with big money to change the way players’ performances are measured.

New American studies are now using big data, statistical techniques and economic theory about how people co-operate to get the best outcomes for the whole team. An American economics academic called Daniel Altman has come up with a new method of assessing a player’s worth to the overall team.

He is not just measuring passes, tackles and goals – he is using things like a player’s destructive ability to put the opposition off their stride.

He has resurrected the old economic notion called a Shapley value, which is an economic concept used in game theory to determine each team member’s contribution to success. There’s a great article on this at qs.com.

The odd thing about the Shapley value is it measures both positive and negative traits – as long as those traits increase the team’s chances.

Take for example the game when the Italian blocker Marco Materazzi helped Italy win the 2006 World Cup by insulting the virtue of Zinedine Zidane’s sister. If Materazzi was able to do this regularly, and that was enough to swing games in his team’s favour, that would be seen as a helpful trait in the new data-driven world! The economist makes the assertion that most football cognoscenti are looking at the wrong measurement when assessing a player’s worth.

For example, he maintains that, for the team, a player’s total number of goals scored is of far less benefit than another measure which is non-penalty goals and assists per minutes played. This goals per game chart tells a story, and we know from this year that Suarez and Sturridge of Liverpool got all the glory. 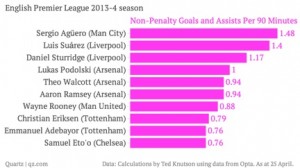 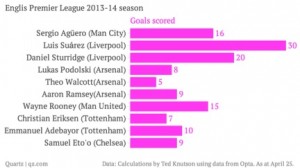 However, the economist maintains that using the better measure for the team as a whole, Sergio Aguero of Man City has been a more effective player, despite commentators claiming he has had a quiet season.

It looks like his team is going to come out top as well.

As I listened to poor Liverpool crumble in the face of the might of Crystal Palace on Monday night, I thought of the effect big data and measurement will have on future football. Maybe the dry numbers men have it right, but wouldn’t it be a terrible shame to see the beautiful game follow so many other sports and become hijacked and beholden to economists and statistics? Is nothing sacred?

We used to play the exact same style in the U-14 West Cork League, and that was only around ten years ago. Reassuring to think that some things don’t change, although I always thought the Dubs would have played better football.

What a superb article and written so nonchalantly. “The odd thing about the Shapley value is it measures both positive and negative traits – as long as those traits increase the team’s chances” Here is a terrifying thought; Let’s just say your Shapley value indicates that Jamie Diamon’s approach to the systematic destruction of J P Morgan’s own customer base is a more efficient way of accumulating capital than the old fashioned method of facilitating the wealth creation process and deriving profits from a much more beneficial form of activity but much more slowly. The Shapley value would indicate that… Read more »

Where is the Pitch Now ? At this juncture serious issues on the playing field have arisen and there is no referee to be seen and the game is a chaos .I among others are in attendance and all we see are : Rogoff who after his retirement from ECB is reporting that the ECB were unfair to the Irish Nation and created a bill of €14,000 for every man woman and child in the country .He claims that this need not have happened and that France & Germany are too cosy together . He maintains the game should be… Read more »

It’s the people who should rule, not the clowns we have for politicians in this country. The only way to get change in this country is through change. Change the way you vote in not voting for any of the mainstream parties for a start. Change the rules so that everyone benefits not just the elite in society. A true Republic is a Republic where every citizen counts!! We’ve had over 90 years of the same thing since the foundation of the State and throughout those years only one strata of society has benefited and that was the upper strata.… Read more »

Poor old Liverpool indeed – turns out that, according to FiveThirtyEight it’s all just bad luck:

Going to such great lenghts to keep Suarez meant they obviously knew he was one of the best in the world, so they should have known they’d have no problems scoring goals. It just makes their failure to strengthen at the back more amusing.

And on The Seventh …….day before the Full Moon the revelations have been made known :

….and more…….and as we arrive to the Full Moon next Wednesday ….the Cracks become Bigger ….the Tension…Rises….the Dante Inferno becomes closer……and…..Macbeths Cauldron…BUBBLES

No, I do not believe it will destroy the beautiful game! It’s a fascinating topic and one which was addressed in the film MoneyBall. A film based on the ‘true’ story of Billy Beane and the Oakland As Baseball team. In this is one of the values of using a new approach to looking at an old game. It is not only Premiership clubs who rely on this data-a common statistic gathered is the distance that a player runs throughout the 90+mins.And some managers use this in their sourcing of new players for clubs rather than traditional scout judgements. The… Read more »

Michael Krieger with a solid article

MK’ll never take that [crucial] extra step for reinstatement of Glass Steagall …”an act of Rebellion” too far for him,i suspect…what a pity

Seems by the overwhelming response that the answer to the posed question is “Who Cares”” At this rate the writings of out host will fade to obscurity as the major issues of our day are ignored. People are looking for information on why were are in the state we are, and I talk globally, rather than inane commentary on an over rated soccer league That bears little relationship to a local team to support but is full of prima donna being paid obscene salaries. In that regard it is just like the banking industry but apart from that sports teams… Read more »

“First the thunder, Satisfied,if the past it will not lie, Then the storm Torn asunder The Future,you and i,get blown away And as the rain it falls Begin again!!as the storm breaks through Heavy in my heart Believe the light in you So the light shines in, you… http://www.youtube.com/watch?v=geALR5sLdrw God knows,Tyler’s no musician ;) but i can appreciate the depth of creativity needed to sculpt and combine harmoniously all the [almost magical]complex components of this song,but sure they do it well on this track!…not to mention the passion,intent,noetic quality, imagination,desire and directionality of greatness. [P.S. video [definitely] killed the radio… Read more »

If you believe that armageddon is nigh then do something about it and seize the day;